A decision to ban buses from entering Angkor Thom starting from August 1 was abruptly reversed last month. The decision would affect buses carrying more than 12 passengers into the Angkor Thom complex and authorities say that the ban will be postponed after it has concluded talks with the tourism bodies. Having seen the weekend crowds at Angkor, a bus ban might be a good idea! 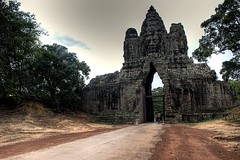 
The Apsara Authority has decided to postpone implementation of a ban on buses containing more than 12 seats within Angkor Thom, and an official said yesterday that the body hoped to discuss the issue at length with the Tourist Transport Association.

Earlier this month, Chrun Sophal, the bodyâ€™s communications director, said the ban would go into effect on August 1. He said yesterday that the deadline had been delayed, though he could not provide a new date.

â€œWe will implement it in the future,â€ he said.