This would not be a surprise to you if you’ve visited Angkor in recent years. The overgrown temple Ta Prohm is fast becoming referred to as the ‘Tomb Raider Temple’ or the ‘Angelina Jolie Temple’, due to the actresses’ filming a scene there. A Hindu leader recently called on the actress to use her influence to better protect the heritage of Angkor. Incidentally, Ta Prohm isn’t even the ancient name of the temple – its original name was Rajavihara. 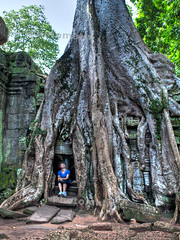 
Angelina Jolie may not have charmed all the locals at her most recent filming location but the people of Cambodia, where she shot Lara Croft: Tomb Raider in 2000, are said to have renamed a temple after her.

Rajan Zed, the president of the Universal Society of Hinduism, told the WENN news agency that the star is so beloved in Cambodia a world-famous Hindu religious site in Angkor has been renamed the “Angelina Jolie Temple”.

“It’s a 12th-century site called Ta Prohm; it is otherwise known as Old Brahma and was initially named Rajavihara or the royal monastery,” he said. “Now it’s popularly called the Angelina Jolie Temple.”