The Seductive Appeal of Urban Catastrophe

The Independent’s story about Kent Davis’ ongoing work to analyse the apsara/devata features on Angkor Wat. Having determined at least 8 facial types from the apsaras/devatas from the walls of Angkor Wat, is it possible to see if these facial features still survive among the locals at Angkor? 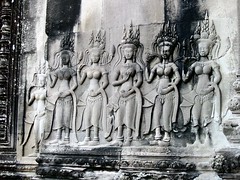 The 12th-century facebook of Angkor Wat
The Independent, 06 September 2010

After turning for help to computer experts from the University of Michigan, a team was able to conduct facial mapping experiments on digital photographs of the women, or devatas. The team, whose findings were presented last month at the International Conference on Pattern Recognition, an academic convocation in Istanbul, concluded that there were at least eight different facial types, perhaps reflecting a variety of ethnicities in the Khmer kingdom.

The results are to be examined further by archaeologists and more computer mapping is planned. But for all the effort that went into the mapping, the results of which were published in DatAsia magazine, many questions about the women remain unanswered.