[Paper] The cranial biomechanics and feeding performance of Homo floresiensis

Hobbits went Out of Africa a million years earlier?

The Observer’s Science Editor has an update on the latest developments in Hobbit research – and how they might have been the first species out of Africa than the homo erectus. Of course, the usual caveats apply: future research will probably confirm or refute this hypothesis. 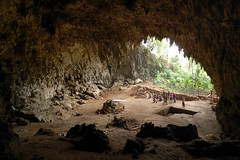 How a hobbit is rewriting the history of the human race
The Observer, 21 February 2010

According to this version of events, Homo erectus evolved from apemen predecessors, such as Australopithecus africanus, in Africa and then headed off around the Old World more than a million years ago, armed with a great physique and a modest intellect. These allowed it to settle across Africa, Asia and Europe. This diaspora was then followed by a second wave of humans â€“ our own species, Homo sapiens â€“ which emerged from Africa 100,000 years ago and took over the planet, replacing all pockets of its predecessors it encountered.

Now a far more complex picture is emerging. Ancient apemen, who might have been thought to lack the nous for global conquest, appear to have done the trick almost a million years earlier. One of the major tenets of human evolution, the story of our world conquest, is now urgently in need of revision.

As to the fate of H. floresiensis, that is unclear. The species disappears abruptly from the archaeological record 17,000 years ago. But why? They had apparently survived quite happily on the island for more than a million years. So what did for them in the end?