[Paper] Ancient DNA from Guam and the peopling of the Pacific

The Chola raid on Srivijaya as a geostrategic manoeuvre

Ok, not really news if you think about it – but good to have more corroborating evidence. This study (open access, too!) shows a distinct mDNA link between the aboriginal Australians and populations from the Indian subcontinent, which lends support to the idea that modern humans migrating out of Africa took a southernly route, hugging the coast, from India, through Southeast Asia and finally into Australia. Quite significantly, the divergence in the mDNA suggests that Australia was populated sometime around 50,000-60,000 years ago, which corresponds quite well to the conclusions derived from archaeology. This in turn implies that Southeast Asia was populated a little earlier, perhaps 70,000 years before present? 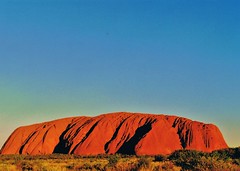 An early dispersal of biologically and behaviorally modern humans from their African origins to Australia, by at least 45 thousand years via southern Asia has been suggested by studies based on morphology, archaeology and genetics. However, mtDNA lineages sampled so far from south Asia, eastern Asia and Australasia show non-overlapping distributions of haplogroups within pan Eurasian M and N macrohaplogroups. Likewise, support from the archaeology is still ambiguous.
Results

In our completely sequenced 966-mitochondrial genomes from 26 relic tribes of India, we have identified seven genomes, which share two synonymous polymorphisms with the M42 haplogroup, which is specific to Australian Aborigines.
Conclusions

Our results showing a shared mtDNA lineage between Indians and Australian Aborigines provides direct genetic evidence of an early colonization of Australia through south Asia, following the “southern route”.