Home » Angkor » Combination of stresses led to fall of Angkor

Combination of stresses led to fall of Angkor

It wasn’t the silting up of the canals, or the rapid deforestation to make way for the urban complex, or the climate change, but rather a combination of all these stresses that culminated in the abandonment of Angkor in the 17th century. This was the conclusion delivered by researchers working on the Greater Angkor Project at the University of Sydney, possibly putting this archaeological mystery to rest. (But if you’ve been a faithful reader of this blog, you’d have known this already, wouldn’t you?) 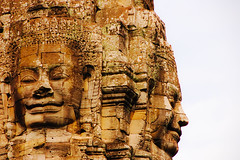 
OVER-DEVELOPMENT of water infrastructure and extreme climate fluctuations have been blamed for the collapse of the ancient Cambodian city of Angkor.

International scientists have used new archeological, pollen and tree-ring dating evidence to back their claims to have solved one of archeology’s mysteries.

Sydney University archeologist Roland Fletcher — a co-director of the Greater Angkor Project, an initiative involving Cambodian, French and Australian experts — said he believed there were “clear implications for modern cities”.

Professor Fletcher and his GAP co-director, Sydney University paleo-climatologist Dan Penny, and paleoclimatologist Brendan Buckley of New York’s Columbia University detail their findings in a paper they are preparing for publication.