From lockdowns to looting: how Covid-19 has taken a toll on world’s threatened heritage sites

[Photos] Ancient Angkor as seen through the decades

… at least, that’s what researcher Kent Davis wants you to believe. The Phnom Penh Post features his work in surveying and quantifying all the images of women (conventionally known as Apsaras, but he calls it Devatas) to determine if there’s something more to the images. His theory is that because of the thousands of Apsara images that adorn the walls of the temples, Angkor was built to glorify women. Does it sounds like a Da-vinci-code-sacred-feminine flavour transposed onto the Southeast Asian context to you? Me too. Of course, we should just ignore the architecture, the royal inscriptions and historical accounts that suggest that buildings of Angkor were temples to Khmer gods. 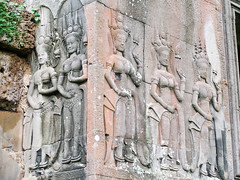 
A team of researchers, led by US educational program and marketing executive Kent Davis, is analysing 7,000 digital photos taken in November 2008 for a database that will attempt to unveil a mystery that’s been bugging Davis since he first visited Angkor Wat in November 2005.

He wants to determine why there are so many images of women in the temples, and he’s postulating a theory that Angkor wasn’t built to honour kings or gods, but to glorify women.