Home » Malaysia » 500th anniversary of the Fall of Malacca

500th anniversary of the Fall of Malacca

In 1511 the Portuguese led by Alfonso de Albequerque captured the city of Malacca, signalling the fall of the Malacca Sultanate and the first foothold of Europeans into Southeast Asia. This feature from The Star of Malaysia commemorates the capture of Malacca 500 years ago. 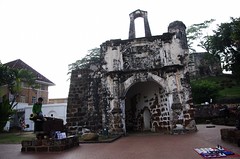 
Yes, we all know the Portuguese came and conquered Malacca in 1511 â€” but did you know that they tried to take the Sultanâ€™s magnificent bed back to Portugal?

IN the port town of Belem, near Lisbon, a map of the ancient world etched on the ground near the PadrÃ£o dos Descobrimentos (Monument to the Discoveries) has Malacca carefully noted on it. Or â€œMalacaâ€, as itâ€™s spelt there. Itâ€™s only fitting that this European town on the other side of the world marks our little city/state because it was from Belem that seafaring Portuguese in the 15th and 16th century set off to explore and trade with India and the Orient during the Age Of Discovery â€“ and Malaccaâ€™s role during that age was very much more than just a footnote in both Portugal and Malaysiaâ€™s history

This year marks the quincentenary of the capture of the famously-rich and thriving port back in 1511 by the second Viceroy of India, Admiral Alfonso de Albuquerque. Of course, anyone who has ever gone through the Malaysian school system will know that date, and the events and consequences of the time the â€œwhite manâ€ came to these shores. But behind the sweeping events on historyâ€™s stage are intriguing nuggets known mostly to historians or students of history alone. For instance, according to the Portuguese, Sultan Mahmud Shah, the then ruling Sultan of Malacca, was an opium addict! Though the The Malay Annals (Sejarah Melayu) does state that he was also fond of literature and studied religion….

Gunung Pulai artefacts and fossils at risk from mining