An article highlighting the woes of maintaining Philippines’ cultural collections in the midst of competing economic pressures, poor infrastructure and looting. 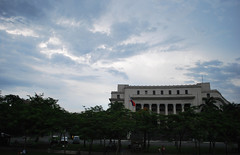 
Thieves and art dealers are the usual suspects, but mildew and flashbulbs are just as dangerous for some of the Philippines’ beleaguered cultural treasures.

From a 30,000-year-old skull fragment of one of its first human inhabitants to imposing churches built during Spanish colonial rule, the Southeast Asian archipelago has a stunning display of artifacts showcasing its diverse history.

But they are under threat on every front.

Even at the National Museum where half a million archaeological items are supposed to be protected, a lack of funds means they could be as vulnerable as treasures outside its walls, said its chief conservator Orlando Abinion.

‘They are in danger, yes, they are prone to deterioration, robbery, vandalism,” Abinion told AFP inside the rundown hallways of one of the museum’s twin 85-year-old neoclassical buildings in the historic old quarter of Manila.

Javanese batik at the Textile Museum