[Video] Which tourist sites in Intramuros are open? Miss Manila shows you around

Manila’s historic sites dating to the Spanish period have been labelled as most vulnerable by the Global Heritage Fund, owing to the government’s inaction over development and over-commercialisation. 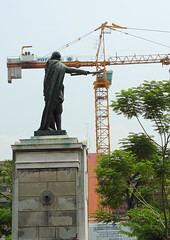 
Two historical sites in Manila dating back to the Spanish periodâ€”the old walled city of Intramuros and the defensive fortress Fort Santiagoâ€”have been included in an international organizationâ€™s list of â€œmost vulnerable heritage sites” around the world.

International non-profit organization Global Heritage Fund (GHF) included Intramuros and Fort Santiago in this yearâ€™s list of â€œsites on the verge” of destruction, among with 11 other historical places in the world.

The group cited â€œinsufficient management” and â€œdevelopment pressures” as reasons why the two Philippine sites currently â€œlook shabby” and are â€œin poor condition.”

â€œAlthough much of the modern development that has changed the face of Manila has occurred outside the walls of Intramuros, several major food chains have opened outlets inside the fortress,” GHF said in its report.