A North Korean company is proposing to build an e-museum near Angkor, featuring computer simulations of the famed temples. 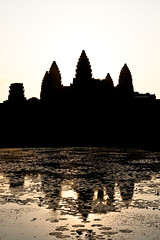 
A controversial North Korean construction company is in talks to build an ‘e-museum’ of Cambodia’s famed Angkor temples, a senior official said on Monday.

Mansudae Overseas Projects wants to build a museum close to the temple complex that will feature a computer-generated simulation of the ancient monuments, Cambodian Culture Ministry secretary of state Khem Sarith told AFP.

‘They have plans to build an electronic museum detailing the history of Angkor Wat temples,’ he said, adding he supported the plans after discussions last week with a company delegation and North Korean ambassador Ri In Sok.