The changing landcape of Bagan

Malaysia’s Star has a travel piece on the ruins of Bagan in Myanmar – with a reference to a five star resort and viewing tower built right in the middle of the pagoda area – the horror! 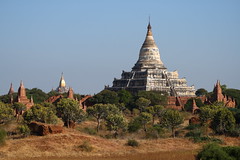 
Little is known of the origins of Bagan, although legend has it that it grew out of a coming together of 19 villages. Its history had little significance until King Anawrahta (1044-1077) ascended the throne.

A fearsome warrior, he conquered the Mon kingdom of Thaton in the south and brought back to his capital the deposed King Manuha together with his vast entourage of architects, artists, artisans, craftsmen of every description and monks who knew the Pali scripture of Theravada Buddhism.

From hereon, the conqueror became the conquered. The monks shaped many aspects of life through their teachings. From them, the Myanmar people received their alphabet, religion and scriptures.

It also marked the beginning of a period of spectacular architectural and artistic pursuits lasting for at least 290 years. This saw a city and its surroundings engulfed with thousands of splendid monuments of all shapes and sizes, their inner walls covered with beautiful frescoes.