The Asian Civilisations Museum hosts a public lecture by Hiram Woodward about Borobudur and the hypothesis of a Javanese Monk who was behind the construction. 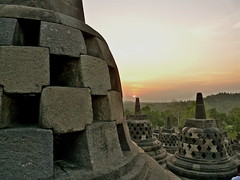 Hiram Woodward will provide a tour of Borobudur, describing the nature of the spiritual ascent that culminates in the open terraces at the summit. The meaning of these terraces has never been well understood, and the speaker will present new theories about their meaning. He will discuss the possibility that a Javanese monk who studied Tantric Buddhism in China in the late 8th century might have returned to Java and played a role in the design of this monument.

The Javanese monk, known only by his Chinese name Bian-hong, arrived in the Tang capital of Chang-an in 780 and was initiated into the Womb Mandala by Hui-guo (also the teacher of the Japanese master Kukai). Dr. Woodwardâ€™s presentation will explore the hypothesis that Bian-hong subsequently returned to Java and was involved in the design of Borobudur. He will propose that the template for the design of the upper terraces of the monument was derived from a letter diagram found in Tantric texts.

Borobudur can be interpreted in the light of texts illustrated in its reliefs. But other texts were involved, and which texts these were is a matter of controversy. Dr. Woodward will present new views concerning these texts.

Hiram Woodward, Curator Emeritus of Asian Art, Walters Art Museum (Baltimore), is the author of The Sacred Sculpture of Thailand (1997) and The Art and Architecture of Thailand from Prehistoric Times through the Thirteenth Century (2003). He is an art historian who received his doctorate from Yale University in 1975. His first publication concerning Borobudur appeared in 1981.

Javanese batik at the Textile Museum