The late Kazimieriz Kwiatkhowski from Poland is to be honoured with a statue of him built in Quang Nam Province, in recognition for his rstoration work done at the My Son Sanctuary, where he worked to restore during the 1980s. For an up-to-date biography of Kwiathowski and his work in My Son, I recommend the book Champa and the Archaeology of My So’n (Vietnam) 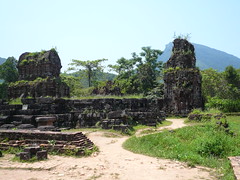 
Kazicâ€™s contribution to My Son is outstanding in the significance of his findings and his restoration approach, which are now appreciated by international experts despite being underestimated initially, according to Hai.

Kazic is one of hundreds of experts from Polandâ€™s prestigious Monuments Restoration Agency to volunteer to work in a country that has been devastated by war.

His mission, which promised no big rewards or payments, was part of the Viet Nam-Poland Cultural Agreement.

He stayed in the country for 17 years until his death, during which he worked with other Polish and Vietnamese experts to compile the most comprehensive and synchronous investigation of the My Son relics of the Champa civilisation.

[Talk] From first farmers to early empires in Central Myanmar