A new translation of Part 1 of the Gazetteer of Foreign Lands (Zhufan zhi 諸蕃志, 1225)

[Webinar] The Materiality of Writing in Premodern Java

The latest find from excavations at the grounds of the Indonesian Islamic University campus in Yogyakarta is a statue of Nandi, the sacred vehicle of the Shiva. 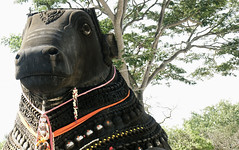 
Astatue of Nandi, the sacred bull that carried the Hindu god Shiva, was discovered on Wednesday among the ruins of what is believed to be an ancient temple at an excavation site in Yogyakarta.

Indung Panca Putra, the head of the excavation team from the Yogyakarta Antiquities and Relics Conservation Agency, said the discovery of the statue, which in Hindu mythology is said to embody sexual energy and fertility, meant that the team would now continue its work until Jan. 20. A previous deadline for the excavation work had been set for Jan. 6.

â€œThe statue is exquisite,â€ Indung said. â€œThe sculpture is carved differently from other statues of Nandi. This one is not depicted as fat.â€

Previous discoveries at the site, which is located on the Indonesian Islamic University campus, include a statue of Ganesha, Shivaâ€™s divine son; a linga , the symbol of worship for Shiva; and a yoni , a Hindu symbol for divine passage or birth.

The full story of the nandi sculpture find can be read here.