Catching up on a month’s worth of rojak, so some of the stories may be a little dated. Today’s assortment takes us to the ongoing culture war between Malaysia and Indonesia, the origin of the Komodo Dragon (no, it hasn’t gone to Malaysia), and Java Man’s eating habits (no, they didn’t eat at Malaysia either). 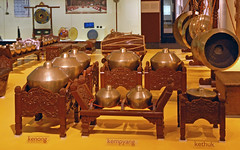 In this series of occasional rojaks (published on Wednesdays) I feature other sites in the blogosphere that are related to archaeology in Southeast Asia. Got a recommendation for the next Wednesday rojak? Email me!