The Thai Ayutthaya-period temple of Wat Pho in Bangkok is to be included in next year’s UNESCO Memory of the World programme (Note – not the World Heritage programme). Wat Pho is particularly famous for its gigantic statue of the reclining Buddha – but that’s not really the reason why it’s being included in the list. 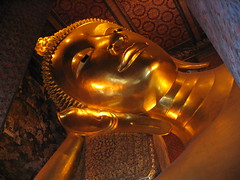 Wat Pho marble inscriptions given historic listing by Unesco
Bangkok Post, 19 March 2008
Note: Full text is up on the Bangkok Post for one day only

Phra Chetupon Temple, more commonly known by Thais as Wat Pho and home of the Reclining Buddha, has been included in the Unesco Memory of the World (MOW) Programme for 2009. The temple was recognised for the historic inscriptions and hermit statues teaching traditional Thai yoga housed inside it.

The templeâ€™s nomination has already been approved by UNESCO committee members in Australia. Official documents affirming this will be sent to Thai authorities on March 31.

Wat Pho was built during the Ayutthaya period on the orders of King Rama I and is one of the largest and oldest temples in Bangkok. It is home to more than one thousand Buddha images, the most famous one being the giant Reclining Buddha, which is also a tourist attraction.

The historic marble inscriptions in Phra Chetupon Wimolmangkhalaram temple, or Wat Pho, in Bangkok have been registered with Unesco’s Memory of the World (MOW) for Asia and the Pacific region.

Khunying Maenmas Chavalit, chairperson of Thailand’s Memory of the World National Committee for the United Nations Educational, Scientific and Cultural Organisation (Unesco), confirmed yesterday that the 200-year-old marble inscriptions have been recognised as MOW documentary heritage.

Registration was approved by Unesco’s memory of the world regional committee for Asia and the Pacific at its meeting in Canberra last month.

The committee will send an official letter notifying Thailand of the recognition, and the MOW national committee will present the letter to Wat Pho’s abbot, Phra Thampanyabodi, on March 31, the anniversary of King Rama III’s death.

On that day, Wat Pho will hold a grand merit-making ceremony in honour of King Rama III, who commissioned the inscription of the country’s religious and secular knowledge, including Thai ”hermit” yoga postures, on 1,360 marble plates in the 1830s .

Wat Pho was built during the Ayutthaya period on the orders of King Rama I. King Rama III commissioned a major renovation of the temple.

He instructed that Thai knowledge ranging from Buddhist precepts, literary works, traditional medicine and yoga postures, believed to have been developed by hermits, be inscribed in marble around the ceremonial hall and nearby pavilions.

This was the first attempt at pooling the art and science wisdom of the Thai people of the time, after Thailand had lost her sovereignty to Burma at the end of the Ayutthaya period.

In those days, the temple also served as an education centre where educated people gathered to discuss their knowledge and exchanged opinions.

Nowadays, Wat Pho is famous for its gigantic reclining Buddha statue and the Thai traditional medicine and massage clinic. A school has also been established inside the temple compound.

Culture permanent secretary Veera Rojanapojanarat said recognition by the MOW regional committee stressed the need for the country to preserve the marble inscriptions.

The Fine Arts Department would be assigned to register all of them.

The Thai Traditional Medical and Massage School is internationally recognised, with over 100,000 Thai and foreign students enrolling each year.

Unesco launched the MOW programme in the early 1990s to guard against collective amnesia, calling for the preservation of valuable archives and library collections all over the world.

In the next step, the regional committee will forward the documentary heritage of the region to the Unesco headquarters, Khunying Maenmas said.

Nominations from Asia-Pacific to the Unesco MOW Program will be listed in the International MOW Register.

Thailand is also applying for the inclusion of the 102-year-old abolition of slavery document passed by King Rama V in this programme.

Incidentally, there’s another Sukhothai site that’s already in the Memories of the World list, The King Ram Khamhaeng Inscription, which is dated to the 13th century.