Home » Cambodia » Angkor Wat may be falling down

Angkor Wat may be falling down

Is Angkor in danger of sinking, or isn’t it? The consensus among the scientific community is that the strain on underground water resources is unacceptably high, but the Cambodian government is saying, “not just yet”. 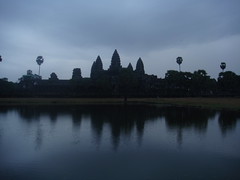 Heritage site in peril: Angkor Wat is falling down
The Independent, 14 March 2008

The problem’s not new – with Angkor rising in popularity as a tourist spot, the nearby town of Siem Reap has experienced an unprecedented tourism boom as hotels and associated businesses set up shop to accommodate the tourists by the thousands. With the rush of human activity comes associated problems of pollution – blackening of stones caused by the exhaust of buses, and the escalated drawing of underground water is threatening to destabilise the ground on which the temples stand.

Sadly, the most high-profile victim of Cambodia’s success in tourism could well be Angkor Wat itself. The World Bank report added that “one of Angkor’s temples is reportedly falling into a sinkhole, suggesting that the underground aquifers may be rapidly disappearing”. The monument in question was the Bayon temple, famous for the delicate faces carved on to its 54 towers. It is reportedly still collapsing into the sandy ground and visitors can observe its sinking foundations and widening cracks. The cultural specialists now claim that if it is happening there, it could happen anywhere.

So is Angkor in danger of sinking or not? The writing seems is literally on the wall, but the Cambodian government has this to say:

Soeung Kong, deputy director general of the Aspara Authority, which oversees Angkor’s upkeep, has urged people to keep a level head about this potential damage. He told Agence France Press: “The harm to the temples is unavoidable. We are trying to keep that harm to a minimal level.”

Not particularly reassuring, I think. Although there’s now a plan to draw water from an underground source away from Siem Ream and Angkor, which would alleviate the problem.

– Indochina by B. P. Groslier

The following are affiliate links for which I may earn a commission if you click and make a purchase. Click here for more books about Southeast Asian archaeology.